First off, I wanted to thank everyone for coming tonight; and especially thank those whom have made this evening possible;  and the food’s been great, too.  Thanks to those behind the scenes – it makes all the difference.  It’s a tremendous honor to have been selected for this – this has always been a dream of mine, and while I am honored, it places me among people that I’ve always had the upmost respect for, and don’t feel worthy to stand near.  Hopefully I’ll live up to the trust you’ve given me.

As apropo, and as per tradition, my speech this evening is on the topic of great speaking.  I’ll do as expected.

The wise men have said: “Tell the audience what you’re going to say, say it, then tell them what you’ve said.” (Attributed to Dale Carnegie, but rumor’d to be as far back as Aristotle).  So true to form, I’m going to begin by telling you about these wise men, what they say, and finally rehash what I’ve said.  You’ll love it.

Not counting the wise guys I’ve met in Chicago, I actually met one of these wise men once.  I was yak shaving, in Tibet, when we met.  He was a nice enough guy, but what really stood out to me about that trip happened on the flight back: Miles Davis and I were on the plane together.  This, is where our story really starts. 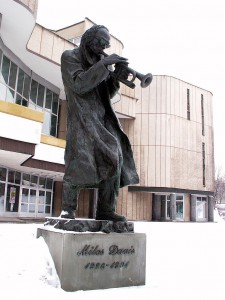 At the time, I’d been reading a book titled “The Philosophy of Jazz.”  It was about the “contract” that all performers have between themselves and the audience – and the book discussed “jazz” as a dynamic back and forth balancing act in which that contract is redefined, renegotiated, broken, adjusted, etc.  In most musical performances, each audience member comes with his/her own expectations.  It is the job of musicians in general to establish and clarify the contract – get everyone on the same page – early on, and then to leave the audience well satisfied.  But the jazz musician, after having established the contract, breaks it.  The magic that separates the greats, is here: in the very careful breaking of the contract.  The genius is displayed when masterfully working the interplay between:

So in order to do a stellar job of doing the unexpected – which is expected – the jazz artist must first construct a contract that the entire audience actually wants, and sell it to them: He must convince the audience of a contact that they would actually be happy with, instead of their expectation.  He needs to sell them something they didn’t really want when they walked in the door.

After selling them a contract, he breaks it.  But the breaking must be brilliant, because one must leave the audience happier with the broken one than they believed they would have been with the one they were sold – and also not longing for their original one they walked in the door with.  The great jazz musician is an indian-giver con-sales-man like you wouldn’t believe – constantly making a contract, selling it till the audience is begging for it, then breaking the contract and giving them something even better instead.  Repeat – and leave them loving it all.

I discussed this at length with Miles, who was very interested indeed – and we had a great conversation.  The part of that conversation that stood out the most though – and this, my friends, is the reason you came tonight, so listen up – was when he said

“If you hit a wrong note, it’s the next note that you play that determines if it’s good or bad.” (Attributed to Miles Davis).

This, is the kicker.  It’s changed my life, and it’s why you came tonight (although the steak has indeed, been great).

You see, sometimes in life we hit the wrong notes.  It’s just because we’re real people.  I know I’ve hit my share of wrong notes, and in all honesty, I know a few other people that have too.  For ages, yes decades and more, I’ve let the wrong notes in my life be that: wrong notes.  And, sometimes they hurt.  I don’t know if Miles ever blew a note that made someone’s ears bleed, but I’m sure my own notes have done that for sure.  But what Miles told me on that plane ride is that it’s the next note that makes all the difference.

But there’s more. There’s a meta-level discussion that you’re having with yourself in life: you are your own audience – you establish contracts with yourself, and you break them.  Sometimes the break is a good one, sometimes it’s just plain a bad note.  But the current contract needs to be evaluated not just in context of that last bad note, but of the previous contracts and how they got play’d.  We need to look at our interaction with ourself, and decide which next note makes our life truly magical.  When we look at the layers and scales in our lives, we see bigger and better pictures, progressions, chords, and true music, and magical jazz.

And when we catch a glimpse of that, it helps us see the notes in the right place, tells us how to look at the note we just played, in context, and helps us know which note re-binds the contract we have, or makes a better contract.  No note is so large, so loud, and so wrong, that it wrecks the whole night.  Renegotiate, and change your vision, and make that next note genius.

Like all art, great jazz comes from the framework of restrictions: working around, within, and without that framework.  The jazz musician knows that mere random notes is not jazz – the audience must be sold a contract they can believe in, even the breaking of it is part of the contract, but it must be there in order to be broken.  So must we.  One does not make music of their life without a structure of expectations with one’s self.  That structure, and trust in it, is essential.  It’s very hard to master – but the key is here: If you hit a wrong note, it’s the next note that you play that determines if it’s good or bad.

You want to be a great speaker?  Follow that recipe.  Establish trust with your audience – never lie to them.  Hit the wrong notes, because that’s life, and follow them up with genius.  Renegotiate with your audience, renegotiate with yourself – catch a new vision, a greater vision, and sell it to everyone.  It’s the next note that counts.  Where will you go from here?
That, I claim, is the recipe for a truly great presentation.  Yes, my friends, you didn’t know it when you came in, but this is what you came for tonight.  Now go and make some jazz.  Have a great night.

One thought on “How to give a truly great presentation, and jazz like that.”